Lord Benyon visited the proposed western extension to the AONB, heard from the DVS and other groups 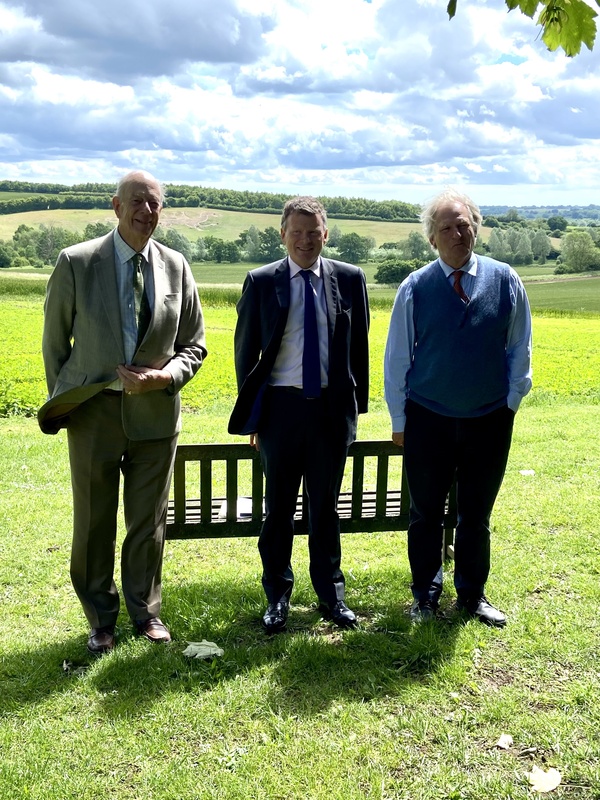 He took the branch line train to Sudbury where Robert met him.  His first stop was to view the nearly completed Arts Centre at Gainsborough’s House, about to be the principal location for paintings by Gainsborough, Constable and other artists, all inspired by the beautiful landscape of that part of the Stour valley which we believe should be an extension of the Dedham Vale AONB.

He was then driven through the area to see the quality of the valley for himself including the viewpoint at Shrubs Farm, Lamarsh, and back lanes on both the Essex and Suffolk sides.

Following that tour, he met Geoffrey Probert, Chairman, and Henry Birch of the Stour Valley Farmer Cluster as farming is one of his responsibilities.

After a quick look at the famous “Bures Dragon”, he met Cllr Nigel Chapman, Chairman and Cllr James Finch, Vice-Chairman of the Dedham Vale AONB and Stour Valley Partnership, which manages the AONB and upper Stour valley.  The Partnership manager, Simon Amstutz with Claire Cadman and Paula Booth of his team were particularly keen to underline the importance of the work achieved on a small budget and to urge the Government to accept and put into practice the recommendations of the Designated Landscape (Glover) Report.

Finally, he met William Shearer, Deputy Chairman with Adam Sedgwick and Mike Hunter of Dedham Vale Society, Alex Robson, Chairman of the Colne Stour Countryside Association and David Holland, Chairman of Stour Valley Underground. At both meetings he was urged to use his influence to facilitate the early inclusion of the Dedham Vale extension by Natural England, was made aware of the electricity transmission threats and the importance of putting energy generated from the North Sea windfarms and Sizewell C nuclear power station undersea rather than overland.

As he only had three hours for the whole visit, the presentations were all brief and to the point.  The Minister took a great interest in all that was said, asked frequent questions, appeared supportive of our aims and undertook to see what could be done to speed up our AONB extension.


We now wait to see results.